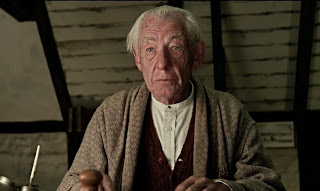 Mr. Holmes is a new film starring the venerable actor Ian McKellen. In recent years, McKellen has gained new audiences as a superhero villain (Magneto in the XMen films) and a wizard (Gandalf in the two trilogies of The Hobbit/Lord of the Rings).  For decades, McKellen has worked on stage and film, lauded for his performance. Without a doubt, this new film showcases the fruitfulness of his long career.


Without spoiling key plot points of this film or its source material (a 2005 novel A Slight Trick of the Mind written by Mitch Cullen), let me share some thoughts:


McKellen portrays an aging Sherlock Holmes, predominately in his extreme latter decades, dealing with a diminishing physical capacity with the telltale signs of forgetfulness hinting the fog of dementia slowly settling in his mind.  Some parts of the film depict Holmes at the end of his illustrious career as a consulting detective, working alone as his trusty companion Dr. Watson married and no longer living on Baker Street.  McKellen deftly shows a dapper Holmes, working away at a case that confounded the authorities, juxtaposed with the man in his elder years, living alone, save a housekeeper and her young son.  There are times when the camera closes in on the aged Holmes, with McKellen showing a man in his late winter years, and they are hard, lingering days of diminished capacities and deep regret.


The film highlights the housekeeper’s son, who finds a mentor figure in Holmes, who warms to the boy’s curiosity and even shows him how to maintain the bee hives that Holmes spends most of his daytime fussing over.  The son explores Holmes’ upstairs study and finds a folder of the old man’s writings.  He becomes fascinated by Holmes’ attempt at writing the story of a case from years ago.  It turns out that Dr. Watson wrote a version of this case, which turned out to be Holmes’ final case.  Holmes, however, retells the case, trying to understand what happened in a different light. Far from triumphant, Holmes’ recollection of these events demonstrates why Holmes retired and moved off to a largely solitary existence out in the countryside.

The film revolves around memory and the way we tell our stories.  Holmes struggles with memory, yet he is driven by his lingering regrets to regain enough of his recall that he can revisit the details of his last case.  Holmes tries a variety of treatments, including a lengthy trip to Japan to gather a rare plant said to have restorative, memory boosting qualities.  The flashbacks to the events of his last case are hard won, moments of clarity that he rushes to capture in his prose.  The housekeeper’s son presses him on details, wanting to know what happened next.  Holmes appears at times uncertain of his ability to remember as well as his fear of what his memories will reveal about past mistakes and sorrows.


While in Japan, Holmes encounters firsthand the survivors of the nuclear bombings, wandering through society as barely acknowledged victims of war.  While a smaller subplot, the scenes of his recent trip to Japan resonated as I saw the film a few days before the 70th anniversary of the bombings.  Historians and educators continue to lament the resistance from certain quarters in public and political circles to displays and retrospectives that examine the costliness of such decisions.  Holmes staggers down the street in disbelief and overwhelmed by what he beholds.  As I watched this, I reflected on the irony that it might be safer for some that this honesty be confined to an art house film rather than in a more public venue such as the Smithsonian, where in 1995 a political firestorm ensued when a proposed exhibit would have displayed the fuselage of the Enola Gay bomber as well as artifacts and commentary demonstrating the severity of the bombing’s consequences on the people of Hiroshima and Nagasaki. See this article: http://www.digitalhistory.uh.edu/disp_textbook.cfm?smtid=2&psid=3498


Working with congregations, I am quite aware that churches share their memories and history quite selectively.  A church may have patterns of conflict or other upsetting incidents along its congregational history, and yet it is only after much detective work on a pastor or consultant’s part that the dynamics and distress come to the surface.  Further, a church’s history can be understood sometimes by reading the archives or the formal “anniversary history booklet” and then compared against the narratives one learns over a cup of coffee one-on-one or just listening to the buzz out in the parking lot after a business meeting.  A skilled interim minister or gifted and courageous settled pastor, and better yet, a congregation willing to work with the interim and one another can be a great corrective and healing experience for such a church, if people are prepared to journey through the fog of memory and learn from their past and own what really happened or got left undone or unsaid.
Watching Mr. Holmes, I took great delight in seeing a master actor at his craft.  I also saw an earnest portrayal of memory and what really needs to be lost and found if we are to be more faithful to ourselves and before God.  Holmes will gain a measure of peace in his late years, but only after he has faced a more sober and earnest exploration of his past.
Posted by Jerrod H Hugenot at 6:53 AM